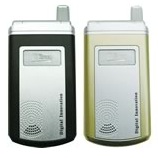 The Cloud hotspots seem to be up and down like YoYo's. I have been using the Cloud with my laptop for months and have the same problem - maybe they're just not up to the job? I don't have a Mobiboo phone yet, but will probaly get one ... If the Cloud is stable!

[Editor's note: You bring up an important point. I don't know of any UK, US, or international service that provides monitoring and 'weather reports' for hotspot availability and consistency, something critical for VoIP usage.--gf]