Skype software for the Wi-Fi and Bluetooth enabled tablet is out: The $400 N800 lacks any cellular connection. Unlike the iPhone, it can run the just-released Skype software for it, and play Adobe Flash content, such as YouTube and other streaming services that rely on a Flash movie playback subsystem. Skype also works on Windows Mobile.

Skyp has filed a petition with the FCC to force cell operators to allow the use of its software: The petition wants the FCC to enforce the 1968 Carterphone decision that required any non-harmful devices access to AT&T’s then-closed phone network. This broke AT&T’s monopoly on phone rental, among other changes. Skype wants the same privilege: They want cell customers to be able to run any non-harmful software.

Two round-ups of VoIP options, some of which include Wi-Fi: InformationWeek offers an exhaustive look at VoIP calling, including round up the services, the handsets, and the technologies, including UMA (unlicensed mobile access) via T-Mobile. David Pogue at the NY Times focuses on long-distance calling, and looks at the most popular and convenient options.

iPhone Launches--No, Not That One

Cisco’s Linksys division rebrands, extends its cordless and IP phones: Cisco had the iPhone trademark, so the likelihood of Apple offering an iPhone—which was an unlikely name for Apple in the first place—were dim. Linksys already had a few models of VoIP phones that work wirelessly as cordless phones connecting to adapters plugged into computers, or pure IP phones using Wi-Fi for network access. They rebranded their existing phones while adding two more models.

Relevant for VoWLAN News is the WIP320, an 802.11g Skype phone that has an estimated street price of $200 when it ships in the first quarter of 2007. Linksys already offers the WIP300 (minimally featured IP phone, $220) and the WIP330 (micro-browser-enabled IP phone with hotspot login rules available, $370).

Another shot across the bow of landlines: Smartphones can be a little smarter with Skype 2.2 for Windows Mobile. The application works on 120 Windows Mobile devices and offers the same features as the Skype desktop client, along with extras like secure connection support for proxies. Skype says they’ve had 5m downloads of the various betas. The service requires a smartphone with a Wi-Fi connection. A Symbian release is still expected this year. Symbian powers 70 percent of smartphones worldwide, but only a tiny fraction of US smartphones.

The New York Times weighs in on voice over Wi-Fi in the wild: Matt Richtel files a lighthearted story about using a Wi-Fi phone from Belkin that handles Skype voice calls. He notes that it will be increasingly likely that strangers might use unprotected Wi-Fi networks to make phone calls—which will probably disappoint those piggybackers. While purposely public Wi-Fi networks will be located in places that people will frequent and typically designed to provide strong signal strength throughout an area, a hijacked signal might ebb and flow and not be great for phone calls.

That’s why there’s such interest in UMA (unlicensed mobile access) and similar technologies or approaches that will allow either seamless or manually switched service on both cell and Wi-Fi networks. A weak signal on one leads to usage on the other. T-Mobile, as noted in the article, has an offering available just in my home market of Seattle right now; Richtel says the service is in testing, but it’s actually commercially available for purpose at any T-Mobile corporate-owned store and perhaps their affiliates. I’ve only checked with the corporate stores.

These aren’t Wi-Fi phones, but more like traditional cordless models: The phones will use DECT, a long-standing European cordless phone standard, to connect to a base station that can route outbound calls over the Internet via Skype (using SkypeOut or Skype names) or through a landline. The phone can accept incoming Skype and landline calls as well. It will ship in December as model VOIP841; no pricing has been set.

These phones are distinct from Wi-Fi phones, which will likely be more complicated to setup and use; these are cordless phones that simply plug into existing wired connections. Because of the sheer normalcy of these phones, including the integration of landline calling in one handset, they’re more likely to achieve general consumer adoption. 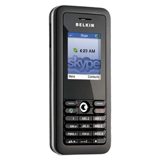