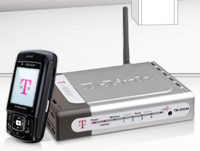 I can't see how the phone would be restricted from working on an ordinary AP. I understand that having the T-Mobile wireless router would help conserve battery life because of WMM-PS, but I don't see what that has to do with allowing phones to associate. In fact, I'd bet money that the service does *not* require a T-Mobile wireless router to work at a subscriber's home.

[Editor's note: My guess is that the phone uses EAP-SIM authentication or perhaps another form which requires 802.1X. The gateway is preconfigured to authenticate with T-Mobile over the Internet connection. This would prevent the phone from associating to another other gateway.--gf]

I have to say that makes even less sense.

First of all, if they require 802.1X that would mean that the T-Mobile wireless router would be unable to handle any other Wi-Fi stations on a subscriber's home network. There's no chance of that happening.

I guess this is a silly discussion because we will know a definite answer soon enough. Keep us posted, will ya.

[Editor's note: The gateway will very likely have multiple virtual SSIDs, with separate authentication options. This is very typical in newer Wi-Fi gateways for the home (see Peplink, Ruckus).

Please keep us posted on this pilot. I am looking to roll this out in West Africa using the same phone. But i have to put up quite a few hot spots though as most people don't have internet at home here. I would especially like to here about the quality of the service more in terms of codecs used by the mobile phones, QoS features in the actual router itself. I do realise that the quality of one's internet connection ultimately impacts the quality of the service. I am primarily targeting the large expat market who call North American and European destinations.

It's been a few months since T-Mobile launched HotSpot@Home. Any additional user experience feedback someone can share?

UMA Phone doesn't use a codec, it uses Wi-Fi and works as a wrapper to take the packets to the security gateway of the UMAN then the UMAN takes that traffic back to the GSM network.

QoS looks at the packet size and UMA service has a very distinctive packet size, thats how the router gives priority to UMA traffic over data packets.

[Editor's note: That's not correct. The Wi-Fi protocol that's used for QoS, WMM, relies on a priority queue number being placed in the packet. That pushes some packets to higher priority than others. See this article at SmartBridges for details.--gf]